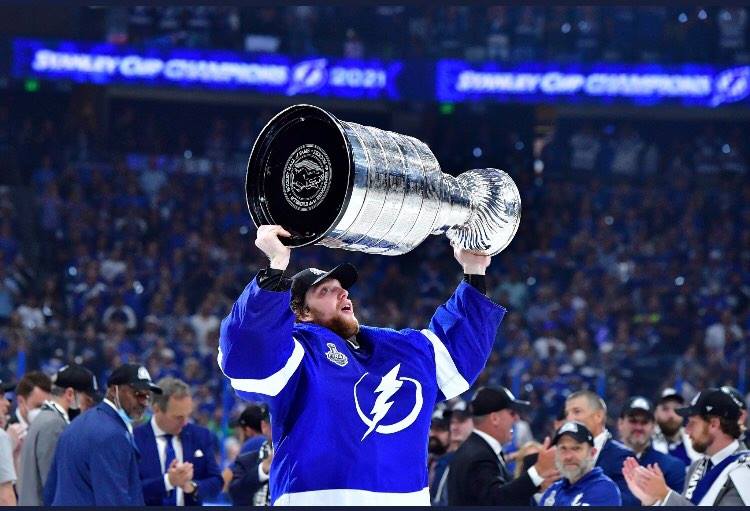 The Tampa Bay Lightning have won the 2021 Stanley Cup, with a 1-0 win over the Montreal Canadiens in Game 5 of the Final, to win the best-of-seven series four games to one.

It’s the third time in the franchise’s history being crowned champions of the National Hockey League and the sports world has decided it’s not cute anymore.

“Yeah, the novelty is gone”, said veteran sports reporter/talk show host/podcaster Larry Fisterbluster of New York where they know everything and take it upon themselves to decide for everyone else what’s good and what’s not, speaking on behalf of the whole world of sports. “You’re like that German polar bear cub that everybody loved because he was so cute until he turned into an asshole. Do you know what happened to that bear? He drowned from being an asshole!”

Mr. Fisterbluster took time out of his busy schedule of being bitter about the Lightning eliminating the New York Islanders in this years semi-finals, the Yankees currently lagging behind the Rays (the team that eliminated them from the playoffs last season), the Bucs winning the Super Bowl and just the general condition of all New York teams being trash, with the possible exception of the Mets, the team that even New Yorkers themselves usually make fun of, to call us up and share his unsolicited insight and analysis.

“When you beat Calgary in 2004 to win it the first time, it was like, ‘awww, look at that; a team from Florida – FLORIDA! – has won hockey’s ultimate prize! Ha ha ha!’ It was adorable.”

“Then the Lightning won the Eastern Conference in 2015 before losing to the Chicago Blackhawks and it was like, ‘yeah, welcome to the real world’.”

“When you were swept in the first round by Columbus in 2019, the season you had the NHL’s best record, it was hilarious. You were back to being the kind of inept goofs we’ve come to expect from a place like Tampa, Florida.”

“But then you won it all last year, beating the Dallas Stars in the so-called bubble in Edmonton, and we were all like, ‘okay, okay, good job; you’ve earned some begrudging respect, now sit back down. That’s enough

“Now this? Now you’re repeating as champions, becoming only the ninth team in NHL history and the youngest franchise to do something that hasn’t happened in the NHL since 2017 when the Pittsburgh Penguins, a real, established team from a real city, did it?? And you’re doing it by being savvy and exploiting totally legal loopholes in the system while taking advantage of other general managers with smart trades along with a top-notch scouting department and player development system to build a highly skilled juggernaut, like something you would expect from established teams from real cities? Not cool, Tampa Bay! Not cool. We’re supposed to be the ones doing stuff like that!!”

“Even worse, for this to happen against Montreal, the NHL’s most storied franchise, well, that’s just downright…”

He had more to say but unlike other local media outlets who get massive butthurt boners any time people from other places talk shit about us, we got bored so we hung up on him and went about making our plans to be at yet another celebratory boat parade, which will take place next Monday.