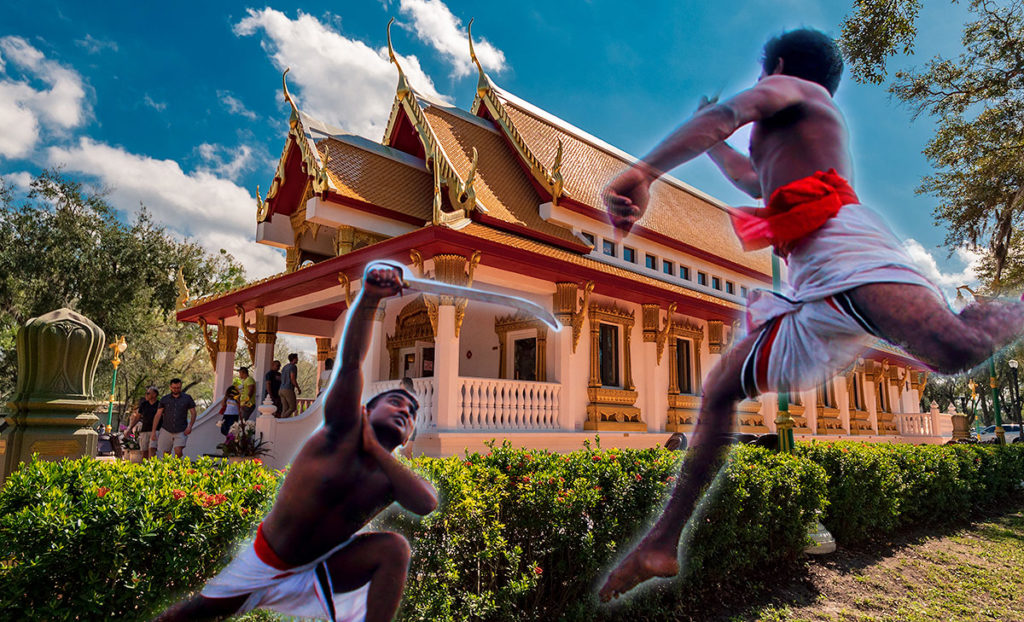 In an event that was closed to the public, the Thai Temple of Tampa held a Mortal Kombat style martial arts tournament last weekend, and based on reviews from guests who got the invite, it was quite a sight to behold.

“It was absolutely amazing,” said Ken Tucky, long-time visitor of the Temple. “I’ve been coming here for over a dozen years, it’s so peaceful, every weekend I love the market and the food, but I had gotten an invite in the mail, and it said, ‘you’re cordially invited to the Thai temple fighting tournament,’ so I showed up and it was guys with magical powers shooting fireballs at each other, and a 6-armed women flying through the air who also shot some sort of purple fire from her body. It was utterly insane.”

According to tournament viewers, there were numerous entries who appeared to be monster human-hybrid creatures with powers unseen in this world. Magical weapons, indestructible attire, beautiful tropical views, the tournament had it all. It’s also rumored there was a large table of various dips and exotic vegetables accessible to all guests, which ran out of Kwazi fruit and Django beans almost immediately.

“We’ve had peace for thousands of years around here, it was time to let loose for a day,” said 75-year-old Thai Monk Peng Fing. Peng floated over to me on an invisible cloud. “We’re peaceful here. We love life and the earth and all people, and you know sometimes that just gets old.” Peng uncrossed his legs from the floating position he was in, touching his feet to the ground. Suddenly an aura of fire surrounded his head like a bright halo. I stared wide-eyed in awe. “When you recognize your true potential you can unlock it,” Peng tapped me on the forehead with the head of his staff, a tiny fire halo appeared above my head. “Well then!” Peng laughed in satisfaction. “You’ve got a tiny halo inside you!”

I couldn’t believe my eyes, I reached up to touch it, and it didn’t burn me.

“The harder you work, the larger that halo can be!” Peng motioned with his arms open to connote growth.

“I think I understand!” I said with joy.

I shot a fireball from my hands into the sky.

Hundreds of Thai monks descended on me.

“What did I do wrong!” I shouted. “Peng told me to work hard so my fire halo would grow larger!”

The monks didn’t listen to me, they got closer. Their monk hands glowing with magic, charging up their chi, I was assuming to blast me if I made any sudden moves.

“Wait!” A man in a long robe yelled from atop a palace roof. It was LeBron James!

“I hang out here when I’m not in the NBA finals.” James said. “So not that often.” All the monks laughed, I didn’t really.

“That’s awesome man, so why did you shout ‘wait!’ When all the monks were about to attack me?” I asked.

“Weren’t you on that MTV show?” LeBron asked me.

“No.” He said. “My kids like it though, and they made me watch some YouTube video where a comedian was doing stand up on a train at the airport, and that’s how I recognized you.”

“Kind of, I was on a plane myself, on my way to the Sahara Dessert on vacation with my family, I half-watched it, my attention was mostly on the NBA finals, that I just so happened to not be in this year.” He got mad, like I had brought up the NBA finals. “Why did you make me think about the NBA finals?” LeBron asked as he looked up at me, eyes tearing up.

“I’m not going to hurt you…” LeBron said. “But they are!” Motioning towards the monks. “Get him!” He screamed, sicking the monks on me. Now I’ve got to be honest folks. I’ve had some epic battles in my life, but nothing compared to what happened to me in this moment. Don’t get me wrong, I lost the fight, but it was epic what happened.

I did this really intricate series of flips, shooting spirit blasts from my fingers as I twirled in the air, narrowly missing the spirit blasts being shot at me from the monks, within millimeters. I gracefully bounced about the temple grounds, stunning the monks, non-lethally, one after the other, in an efficient, flashy, fashion.

“POW!” “ZAP!” BLAM!” Went my spirit blasts, zooming through the air at my opponents with pin-point accuracy, in a manner in which I had never ever come close to in my life. Then right when I thought I had dealt with most of the monks, a little kid threw a glass Corona bottle at the back of my head and it shattered on impact, knocking me out cold.

I woke up a few blocks down the street with a note pinned to my shirt which read, “You fought valiantly, however do not come back here ever again.” – Signed LeBron James. I was able to sell the note with LeBron’s signature on the internet for $60. I used the money to invest in my own meditation business, and since then I’m proud to say my fire halo has grown 3 inches in diameter, and I see progress every day.