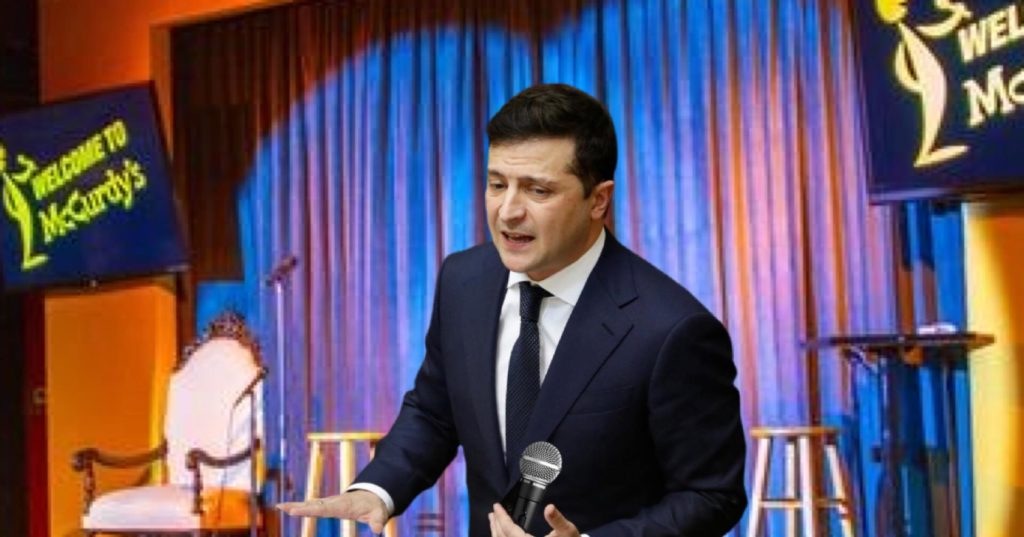 Volodymyr Zelensky the President of the war-torn country of Ukraine is coming to Florida to perform at McCurdy’s Comedy Theatre in Sarasota next week in an effort to bring awareness to his countries plight while also raising funds for relief supplies for Ukrainian citizens.

“These are not the bombs I grew up dealing with.” Zelensky said, half-joking.

“I enjoy killing on stage, not in real life, I miss being a comedian and not being in fear for my life on a daily bass from Russian assassination attempts.” Zelensky continued from a zoom call taking place inside of a moving Tesla roadster.

“These days I spend my time rallying the morale of my citizens while also trying to combat the spread of misinformation from our Russian invaders, but I think it would be good for my mental health, and the happiness of the people around me, if I did some comedy again.” Zelensky said sincerely into the iris of the cell phone camera.

“I’ve been working on a new chunk about getting groceries while ignoring air-raid sirens that I think is going to hit harder than a Russian missile into a Ukrainian airport.” Zelensky chuckled for a brief moment before reality came rushing back in.

“It will be nice to take a little trip to Florida, I look forward to seeing the Ringling Circus Museum in Sarasota while I’m down performing. Ukrainians also love the circus so I think I could find some new source material there for future jokes!” Zelensky delivered excitedly, eyes glimmering with innocent hope.

Then the deep-fake technology wore off on the person I was communicating with on Zoom, and it turned out I was being pranked by a Russian oligarch.

“Screw you, give me my yacht back!” Yelled the grotesque Russian person who was now staring at me through the phone screen.

I got scared so I ended the call. I don’t know how they get my number or why they made up a story about Zelensky performing at McCurdy’s, but it was just more misinformation. Sorry for the false news.