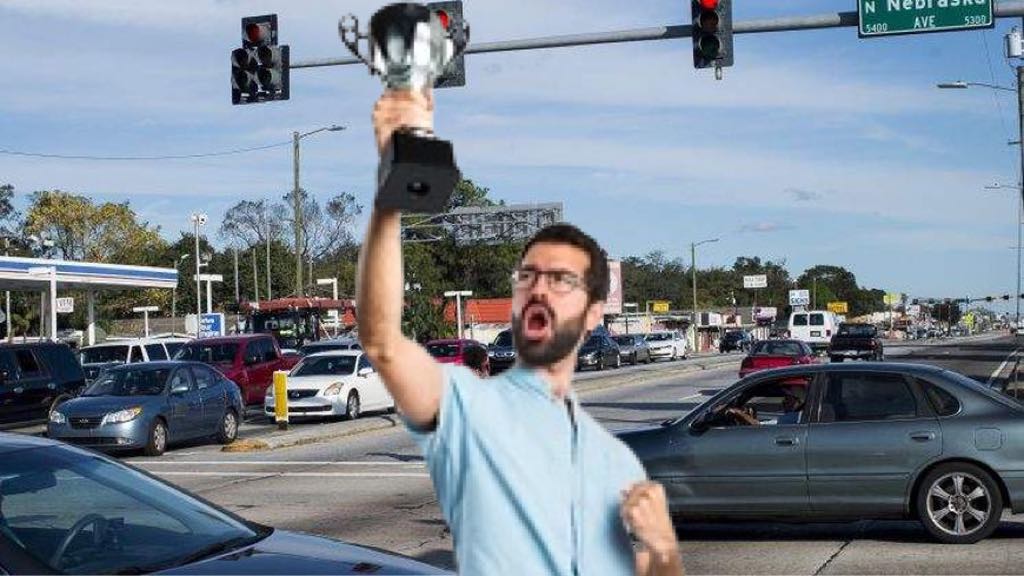 Hillsborough avenue has won a Guinness world record after having the most consistent traffic for 20 years straight.

“We’ve never seen anything like this anywhere in the world.” The Guinness representative said, motioning towards the road.

“There has been traffic on this road 24/7 for 20 years straight and no one seems to really understand. It’s not going anywhere important, people don’t need to be on this road, it’s an enigma.” Said President of Tampa Traffic Services, Ed Jewcation.

“We truly don’t know where these cars are coming from, where they’re going, how they got here, it just doesn’t make any sense, it can be 3 am on a Monday night and it’s a never-ending stream of humans in cars going God-knows-where!” Jewcation said throwing his hands in the air in playful agitation.

“Here, check this out!” Jewcation said, waving me towards the traffic with him.

“I’m not even sure these are real people!” Jewcation said, somehow unphased by the terror of what just happened.

“Do you think these are some sort of characters in a simulation?” I asked with fright.

“They don’t pay me enough to bother.” He said shaking his head.

“Well, I’m going to go now.” He said, slowly turning to mist and blowing away in the wind of the Hillsborough traffic.

I screamed and cried, not knowing what I just witnessed, but luckily I had my notepad handy and was able to scribble exactly what took place, and take note in this article as accurately as I could.

I tried to go up to one of the cars in the traffic and knock on it the way Jewcation did, but the closer I got to the traffic, the fast it became, until I was right up against the road and the cars must have been going 200 miles per hour. Still packed with cars, bumper to bumper, but now speeding at an extremely dangerous speed.

As I stepped back the traffic would get slower until I was about 50 feet away and it got to a dead halt.

I tried to get close again, but once again the cars sped up so I couldn’t get near.

After that I went home and felt sick for 3 days straight. Nothing made sense anymore and I realized I had lost 50 pounds and could see all of my bones.

I went back to Hillsborough avenue once I felt better and there were no cars, just floating neon lights. I didn’t understand it.

Anyways, you can see the Guinness world record award hanging in the Tampa town hall located in downtown.