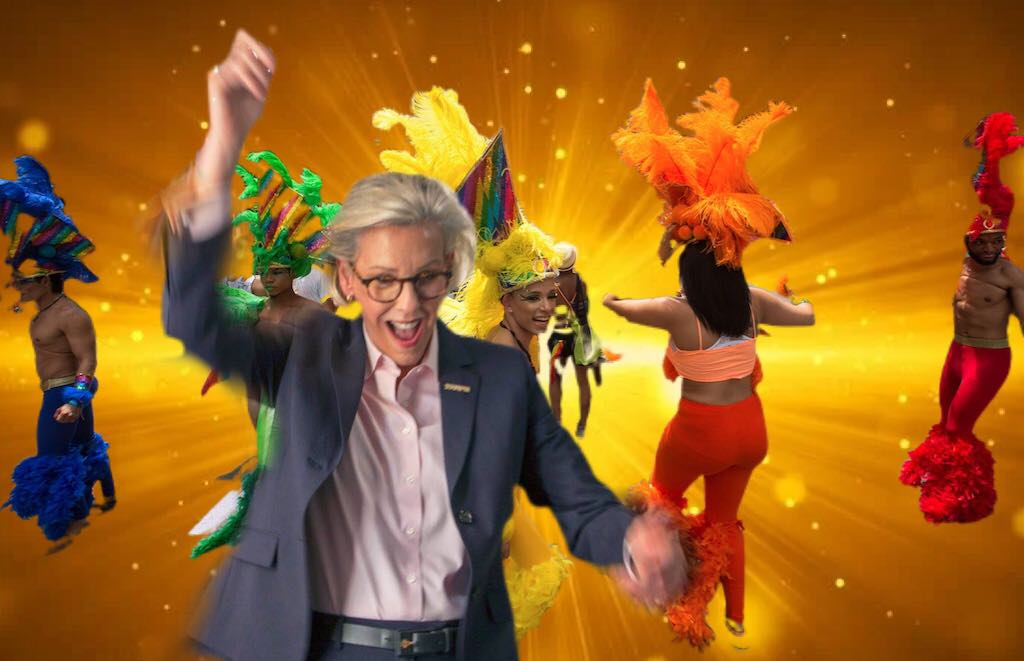 “We all have a special light inside of us.” Said Castor to a crowd of onlookers gathered at the riverwalk of Curtis Hixon Park.

“People who love people of the same sex have a positive glow which cis-gens unfortunately do not possess.” The mayor explained.

“We have a burning flame inside of us which comes from being able to connect with someone who see’s the world just like we do, and not from someone of an opposite sex who objectively does not view things the way you do. We have a perfect symbiotic communication which makes life much more enjoyable and magical, so I believe it’s time we share our gift to brighten the rest of the world and make our days just as long as they used to be before we set the clocks behind and made night time come earlier now.” Castor passionately delivered to a smattering of applause from the 1 pm park crowd.

“So gay people. What we will do, is every morning, just hold an open jar an arms-length in front of us, facing ourselves, and it will slowly, naturally, capture some of our gay light, and then at 5pm when it starts getting dark, we will hold those jars out the window, and un-cap them, letting the light release into our atmosphere, lighting the world.” Castor explained.

Then ThunderBug came out and did a break dance routine while the Curtis Hixon crowd cheered and danced along.

I think this was all part of some sort of press conference, I was a little late to the event, I didn’t even mean to see it, I was on a Hinge date, and we were walking by the spectacle and noticed a large group of people and someone who looked like mayor Castor and my date went, “Oh look! Something’s going on! We should go look, maybe you can write about it in your fake news thing!” And laughed ignorantly, not really understanding what it was I do at all.

So we go and check it out, and I’m still pissed that this girl I don’t know tired to influence my professional life and tell me what I should cover as a fake news journalist, so I decide to mess with her a little, I say to her after the presentation, “You know what baby sweets, after hearing that, I think I don’t like chicks anymore, I want to be gay too so I can harness my gay light.”

And she went, “Huh? What?” All dumbfounded and stuff.

So I grabbed the closest man I saw and I pulled him close, and I whispered so my date wouldn’t hear, “Hey, I’m trying to make my date mad because she pissed me off, trying to effect my professional life, could I kiss you and pretend I’m gay with you real quick?”

And the guy whispered back, “Yea, go for it.”

So I kiss the guy, my date is traumatized, drops her ice cream cone, starts audibly questioning what must be wrong with her for me to suddenly “switch sides” within the first few moments of our date, she stormed off, and that’s when I actually became gay.

I look at the guy, I realize now after the kiss, I notice his features and he’s very attractive, looks rich and powerful, I say, (not whispering anymore) “Hey, it worked! But I do think I’m gay now and I think I’m in love with you.”

He goes, “Oh, no problem! I’m actually gay now too! That kiss worked and it must have turned both of us homosexual at the exact same moment!”

So we get married.

And the guys name was Ron Desantis.

He also has something to do with politics he tells me, but I try to keep my work life separated from my private life so I don’t bother learning.

And yes, we have both been contributing to gaylight savings.