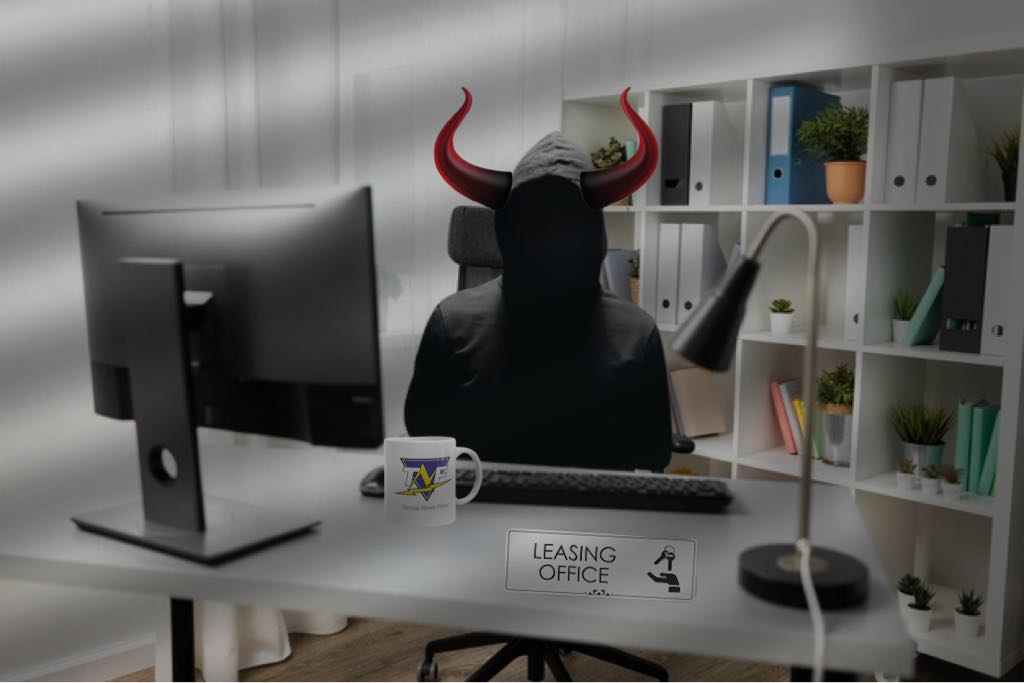 Word quickly spread throughout the Tampa Bay area of “satanic landlords” after several tenants complained of strange encounters with their landlords via social media.

“His voice was deeper than usual — like a growl — and his eyes were jet black.”, wrote Theresa Stickfern in a Facebook post, explaining her shocking encounter with landlord Ernest Zurich. “He said he was raising our rent by two hundred dollars just an hour after I told him my husband died. I already can’t afford the funeral arrangements. Now there’s no way I can even afford Applebee’s half-price appetizers, a staple of our community’s diet.”

Stickfern rents a condo in Seminole Heights and has a last name that we’ve never heard of and sounds made up. Her condo is part of the Palm River community, which we believe was named by a chimpanzee that throws darts at a board with random words related to nature on it. “I just don’t know what to do, it feels like my landlord might be Satan.”

Stickfern was surprised to find that she wasn’t the only Tampa Bay resident experiencing these encounters with landlords. Complaints across various communities include objects randomly catching fire anytime a landlord was nearby, an overwhelming stench of feces and a swarm of flies engulfing landlords, and landlords standing outside of houses naked whilst chanting in dead languages.

Ravi Baldovin told reporters, “I received a call from my landlord, but I couldn’t hear him over what sounded like thousands of flies buzzing around him. All I could hear from him was insults and loud licking noises. I had to just hang up after my phone started bleeding. Am I in danger?”

Is this strange phenomenon affecting Tampa Bay residents just a bad case of hysteria caused by rising housing prices, or something more — and truly sinister? To investigate, I sat down with landlord Gilbert Golfbarger at his multimillion dollar mansion. Golfbarger collects rent from 66 different Tampa properties and has recently received public complaints of engaging in “devilish acts”.

“I remember I was at the bank cashing some rent checks when I heard a voice whispering in my ear. It was like deep and mischievous, but echoey, like it had a delay effect on it.” Golfbarger then went into an unnecessary amount of detail to explain the echoey effect, which we understood and could very easily imagine without him having to explain it in such depth.

“The voice said, ‘Raise the prices. Make them pay more. Say it was inflation. You will have fortune, fame, glory. They deserve to suffer.’ and I thought, oh my God… Voldemort? But then I realized it probably wasn’t Voldemort, which is a shame because the wife and I love Harry Pot—“

Golfbarger was then cut off when I swiftly slapped him across the face 3 times. “Sorry, I digress.” He continued. “Just the next day, I had a little angel and devil on my shoulders, like in the cartoons. They had the squeaky voices and everything, except the devil one was way louder and more convincing, so we work something out, then BAM, next thing I know I’m etching a pentagram onto my chest using an ancient dagger.”

Just after saying this, an overwhelming stench like feces drenched in sweat wafted into Golfbarger’s diamond-encrusted living room. He began to sweat profusely before covering his mouth to let out a harsh cough, which briefly lit his hand on fire.

“Didn’t you say you were looking for a new place to live? I can help you get into a nice new place by next week”. “I said nothing about that, how did you know?” I asked him. The room then began to shake and our camera crew broke out in massive hives and lost control of their bowels.

“WHAT’S YOUR FUCKING CREDIT SCORE” Golfberger growled, with a voice that sounded like three different voices speaking at the same time, just like in the movies. “BRAND NEW APPLIANCES, SMART KITCHEN, HASN’T HAD A COCKROACH INFESTATION IN WEEKS”.

Golfberger’s skin turned a deep red, and horns began to grow from his head. “JOIN MEEEE TAMPA NEWS FORCE… AND I WILL BRING YOU UNLIMITED POWER!!! THE FLORIDA HOUSING MARKET WILL BE OURS!!!”, the 40-something year old landlord yelled, whose birth sign was obviously either Capricorn or Gemini at this point.

Fearing for our very souls, our team evacuated the house just as an army of flies and probably some locusts started swarming in. Had we just experienced a close encounter with a man under the control of Satan? Was this the devil himself? Is our great city, even the entire state of Florida, doomed to be controlled by a cabal of demonic landlords???

Tampa Bay comic, travel journalist, and winner of hundreds of awards which he is legally unable to disclose. Still enjoys playing with Legos

View all posts by Jake Brown →