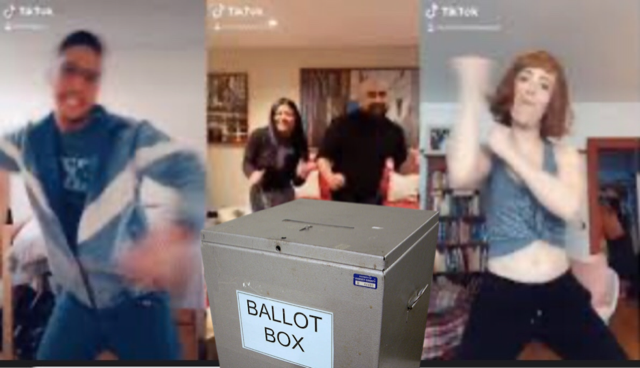 Residents of Hillsborough County will now be legally allowed to vote in the 2020 Presidential election through the controversial Chinese social video app, Tik Tok, as a new executive order allows registered voters the ability to use the app to cast their vote.

You can turn on filters, and prank your vote into going into a ballot box. You can also project your vote in the room with you and record synchronized duo dances, allowing you and your digital vote to interact in new and engaging ways.

“It was a completely bipartisan agreement.”

Said David Polk, journalist for the Tampa Bay Star who was allowed in the room when the deal took place.

“They both kind of hashed out how distracted voters are more valuable to both sides, and they went over statistics of how much easier it is to manipulate people when their in a trance and the overall impact of less informed voters.” Polk solemnly delivered, shaking his head.

“Yea, I mean, it was pretty grim, I don’t know why they chose me to be the only journalist to witness the interaction, I’m seriously getting worried for my life after this, I mean it’s just not making sense for them to let me see up close, just how corrupt they really were, it’s like I wasn’t even there, none of them acknowledged me, but they had me sit at the head of the table, it was something out of a sci-fi man, it was weird.” Polk, seemingly in shock, continued to explain.

The guy at the other head of the table, who wasn’t the President, but acted like he owned everyone in the room would constantly stand up and hawk a loogie on the floor and it was disgusting, but nobody dared comment on it, even though they were savagely yelling back and forth at each other, even though it seemed like the meeting was going very well, I think that’s just how they communicate.”

Polk said, as it appeared his eyes kept rolling to the back of his head, but he would catch himself, and jerk forward, resetting his optics.

“Holy crap, we should probably run if this is a sign of what’s going on in this place!” I shout to my camera guy who’s eyes had gone completely black.

My camera man then began doing a Tik Tok dance and a digital vote was projected next to him from his phone, and they began both swinging haymakers at me attempting to attack me however I very luckily dodged every single hit, ultimately jumping back and catching my breath for a moment and coming up with a counter defense plan, thinking what I could do to end this living nightmare.

“I’ll unplug the reality sphere!” I Eureka moment in my head.

I reach into the metaphysical world in an unexplainable way existing outside of the physical realm.

I unplugged the reality sphere.

Everything is shut off.

“This day can’t possibly get any worse, first someone eats my sandwich in the fridge, now this?”

“Great.” I sarcastically muttered and rolled my eyes

The spikes grew violently in every direction enacting an echoey screech with every growth.

The spikes crack the glass diamond floating above my head.

“Oh yea, I forgot that those are the most important thing in here.” I said, motioning towards the rapidly cracking glass diamond floating above my head.

The glass shattered and I woke up back at my TNF desk in the office.

“Nothing like office 6B on floor 17 of the TNF building” I joked to myself out loud.

“John!” A voice shouted into the office, shattering my peace the way those neon spikes shattered the glass diamond that floated above my head.

“What is it boss?” I ask politely.

“Get the f**k back to work!” He shouted as he threw a full cop of hot coffee onto me.

“Yea, no s**t, a**hole, now get your hiney back in gear or your a** is grass buddy!” He shouted before slamming the door to my beloved 6B.

I closed my eyes again and focused on the rain hitting the window.

“Nothing like Tokyo in the Summer.” flashes across my mind.